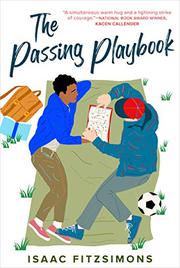 A teenage soccer star starting over at a new school finds love and courage as he takes the field to fight for his team and what he believes in.

Spencer, a biracial (Black and presumably White) transgender boy, begins sophomore year with a firm game plan—blend in and keep his identity private. However, when he’s confronted with an opportunity to join the boys soccer team, Spencer can’t resist the challenge, especially after the cute vice captain says he doesn’t think Spencer has what it takes. Soccer means everything to Spencer, and he refuses to give up his shot to play, even if he has to keep it a secret from his overprotective parents. This contemporary sports romance subverts typical patterns of coming-out stories about transgender youth by centering the feelings of the transgender main character, giving him full agency over his identity disclosure, and providing him with an affirming support system that includes other queer and transgender characters. Initial rivalry heightens the tension between Spencer and his crush, a White boy whose Christian extremist family doesn’t know he’s gay. Their romantic arc adds another layer of nuance to the coming-out narrative. Spencer’s connection to his younger brother, Theo, who is autistic, is also woven into the story. Balancing hope and honesty, this debut deftly handles multiple social themes, including racism, privilege, identity, and accessibility.

A game-changing score to the back of the net.