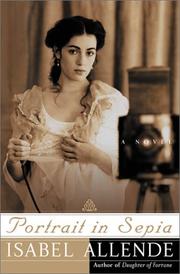 Complex, intriguing, ambitious, and uneven sequel to Oprah selection Daughter of Fortune (1999), continuing the story of Eliza Sommers, as told by her granddaughter, Aurora del Valle.

Aurora fondly remembers her gentle grandmother and Chinese grandfather, Tao Chi’en, and doesn’t understand why she was adopted at the tender age of five by her formidable Chilean grandmother Paulina, who ruled the del Valle family and fortune from an opulent Nob Hill mansion during San Francisco’s Gilded Age. Aurora never knew her real father, Matias del Valle, a bisexual roué and opium addict who seduced and deflowered young Lynn, an artist’s model, then abandoned her when he learned she was pregnant. Matias’s cousin Severo, passionately in love with the naïve and beautiful girl, interceded and married her. Grief-stricken when she died giving birth to Aurora, Severo provided handsomely for the little girl despite his aunt’s desire to forget about it all. Mind you, scandal has besmirched the del Valle name before; Paulina’s public revenge on philandering husband Feliciano was the talk of the robber-baron elite. No matter. Her greatest pleasures now are amassing money and devouring pastries. Bejeweled and bedecked in fussy Victorian finery, becoming ever more corpulent but no less vain, the grotesque old lady fascinates her spoiled granddaughter. They return to Chile, where Aurora is raised amid a host of relatives both wise and eccentric, although she learns little about the world beyond the conservative confines of Chilean society. Married off as fast as possible to the good-for-nothing scion of a distinguished South American family, Aurora takes up the then-new art of photography and copes with her husband’s eventual betrayal and Paulina’s slow death from cancer. Yes, she grows up at last—but she’s nowhere near as interesting as her redoubtable grandmother.

Though her narrative spans nearly 50 years of Chilean and American history, it’s Allende’s remarkable flair for character that makes it all come alive.