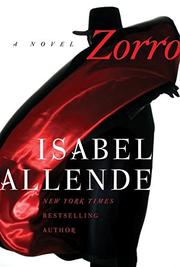 A graceful imagining of the saber-wielding, justice-dispensing freedom fighter of yore.

Children of the ’50s may happily remember Guy Williams’s TV portrayal of the legendary Zorro, who carved his signature initial into his enemies’ flesh with the point of his sword and kept the entire Spanish army in Alta California busily searching for him. Latter-day Californian Allende (Kingdom of the Golden Dragon, 2004, etc.) provides a backstory that brims with modern concerns: In her hands, Zorro is an ever-so-slightly tormented revolutionary whose sense of justice comes from the accident of his birth. The child of a Spanish officer and a Shoshone Indian woman, Diego de la Vega grows up with a profound knowledge of the injustices wrought by Europeans on California’s native peoples. He takes his vulpine identity—zorro is Spanish for "fox"—early on, after a fox delivers him from danger; says his grandmother, helpfully, "That zorro is your totemic animal, your spiritual guide. . . . You must cultivate its skill, its cleverness, its intelligence." He does, reaching adolescence "with no great vices or virtues, except for a disproportionate love of justice, though whether that is a vice or a virtue, I am not sure." A Rousseauian child of nature, de la Vega travels to Spain to acquire a continental education. Becoming radicalized in the bargain, he defies the country’s Napoleonic rulers and joins an underground alliance to battle them, then takes the fight back to America. But first de la Vega must endure being shanghaied by pirates, who, neatly enough, haul him before the legendary über-pirate Jean Lafitte for a parlay. He acquires yet more education in the bayous, then makes for California once more to visit mayhem on corrupt officialdom on behalf of truth, justice and the Spanish way of life.

Allende’s tale risks but resists descending into melodrama at every turn. The up-to-date, even postmodern ending makes for a nice touch, too, and will gladden the heart of anyone ready in his or her heart to carve a few Zs into the bad guys.