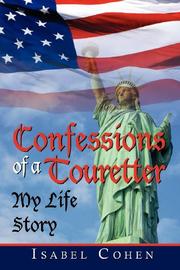 Confessions of a Touretter

In this debut memoir, Cohen chronicles her life from her childhood in Nazi Germany to her adulthood as an accomplished American citizen with strong political views.

In 1938, with the rise of the Nazis, Cohen’s Jewish family hoped to emigrate from Germany to the United States, but the immigration quota was already filled. The family of three settled in Belgium until they were able to be smuggled into France. After a stop at a Swiss transit camp, the family finally, via England, sailed to America. A hardworking, stellar student, the author graduated from New York City’s Hunter College with a biology degree and a Phi Beta Kappa key, all the while grieving her mother’s death, tending to the household and feeling “devastated” by the emergence of her Tourette’s symptoms. (Despite the memoir’s title, Tourette’s syndrome plays a secondary role in the story.) Her father’s announcement of remarriage caused her to be hospitalized with a “nervous breakdown.” After her release, she began work in a lab, where she met her future husband. After she gave birth to a daughter, she returned to work and completed her doctorate. Her 3-year-old daughter’s first manifestation of Tourette’s left Cohen “horrified,” although recent research at least allowed her to put a name to the syndrome. The author presents details of her research projects, her extensive travels, and her daughter’s career, marriage and children; her own happy marriage and eventual retirement comprise the rest of the narrative. For a fairly short book, this memoir is crowded with places and events. Perhaps its brevity accounts for its often bare-bones character descriptions and occasionally flat tone. Cohen saves her strongest feelings for her difficult colleagues, her neighbors’ “twenty-one years of unkindness,” and, in the last few chapters, modern-day American society and politicians. She remarks, for example, that President Barack Obama “has some deep-seated hatred for America” and that she has “a feeling that I am back in Germany in the 1930s.”

A story of remarkable achievements in difficult circumstances that might have been enhanced by a richer, more nuanced style.

LETTERS TO A YOUNG SCIENTIST
by Edward O. Wilson
Nonfiction

WE WERE SO BELOVED
by Gloria DeVidas Kirchheimer
Nonfiction