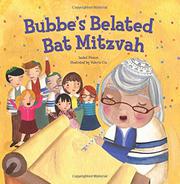 Is serenity a narrative problem?

Bubbe can’t remember how many kippot she’s made. She’s 95, and she’s crocheted a skullcap for every bar and bat mitzvah and wedding in her family. Her great-granddaughter Naomi thinks it’s time for Bubbe to have a bat mitzvah ceremony of her own. In some books, this would be a source of tension. Bubbe might struggle with the religious texts. She might argue with people who think a religious service should be led by a man. But this is a book with no conflict. Bubbe decides to learn Hebrew, and she does. Some readers might prefer a book with less harmony and tranquility, and less sedate pacing. But it seems uncharitable, somehow, to wish any struggle or pain on Naomi and her Bubbe, whose account of her descendants’ coming-of-age ceremonies is something of a thumbnail history of the evolution of the role of women in Judaism. Cis’ illustrations are so expressive that Bubbe’s eyes, captured in a few strokes of paint, instantly make her seem both wise and kind. On the day of the bat mitzvah, all the family members are wearing matching kippot, crocheted by Naomi. This is the exact opposite of conflict, and if it’s a little dull, it’s dull in the most satisfying way possible.

No strife necessary: Readers will be content just to have met Bubbe and Naomi.