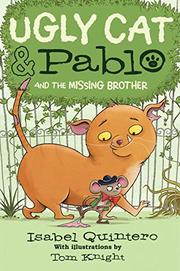 Ugly Cat and Pablo are back following series opener Ugly Cat & Pablo (2017); this time they are on a mission to find Tamarindo, Ugly Cat’s missing brother.

When Ugly Cat realizes he hasn’t seen his brother in a couple of weeks he jumps to all sorts of unlikely conclusions. The favored hypothesis? That he’s been taken by a chaneque—a mythical creature in Mexican folklore that lures children with his flute playing. On a tip from a hamster that lives in Tamarindo’s house, the unlikely cat and mouse duo set off on a rescue mission to a haunted house. With the help of friends and some “killer cucarachas,” Tamarindo’s whereabouts are soon discovered. In the end, all is happily resolved, with no ghosts or chaneques involved. Knight’s illustrations contribute to the silliness. His depiction of Pablo wearing a makeshift raincoat fashioned out of an old lunch bag is priceless. The visual fun gets a further boost by the distinctive typeface given to each protagonist. As with the first book, there is a liberal amount of Spanish sprinkled throughout the text, but a glossary at the end of the book is there for those who need a little help.

With lots of talk about farts, some grossness, a good bit of silliness, and loyalty to friends and family as the central theme, there is everything to like in this addition to the series.