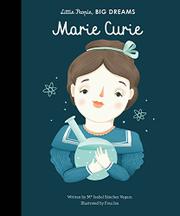 A very first introduction to the great scientist.

Apparently more concerned with explaining why Marie Curie is worth knowing than compiling biographical details, Sánchez Vegara dispenses with most names and all dates to focus on achievements that reflect her subject’s intellect and character. Opening with Marie’s childhood vow to “be a scientist, not a princess” and her later move from her unnamed home country to become “the best math and science student in Paris,” the author highlights her marriage and Pierre’s “terrible accident,” her discoveries of radium and polonium (no explanation provided), her two Nobel Prizes, and how she helped injured soldiers in an unspecified way during a never-named war and afterward established an institute in Paris to further girls’ educations. Isa idealizes Curie’s features in the illustrations, portraying her as a sweet, smiling child with pale-white skin even in a final view (based on a famous photo) showing her sitting on a pile of books in a row of other great scientists—all of whom are, unsurprisingly, male and white. In the co-published Agatha Christie, illustrator Elisa Munsó at least lets her subject grow up but likewise (with rather more justice) leaves her among stacks of books after Sánchez Vegara’s generalized account of the author’s travels, detectives, and gift for plot twists. Both profiles close with photos, timelines, and afterwords that fill in some of the blanks.

Like other tributes in the series, adequate fare for cluing newer readers in on some worthy role models.