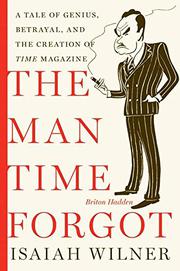 A Tale of Genius, Betrayal, and the Creation of Time Magazine

Wilner’s debut restores the legacy of Briton Hadden, co-creator of Time magazine, whose partner Henry R. Luce systematically downplayed his contributions after Hadden died, at 30, of a mysterious infection.

The author became interested in this subject while editing the Yale Daily News, housed in New Haven’s Briton Hadden Memorial Building. (As an undergraduate at Yale, Hadden had been an editor, then chairman, of the News.) Reading the work of his eminent predecessor, Wilner was struck by its style: “rhythmic, compact, it practically jumped off the page—much like the impish voice of the early Time.” A student essay about Hadden won Wilner access to the Time Inc. archives, where he found a trove of material. He also interviewed many relatives of Hadden, Luce and other Time staffers, and he appears to have read every issue of the magazine, from its debut in March 1923 until Hadden’s death, in 1929. His solidly researched narrative follows both men from 1898—when Hadden was born to money, Luce to missionaries—but focuses on the years during which their stories merged, beginning in prep school at Hotchkiss and continuing to Yale and Time. Each was a ferocious competitor, Hadden always finishing a close first in their professional sprints. As Wilner portrays him, Hadden was furiously energetic and creative; he worked hard, drank harder and appears to have viewed each day as his personal Roman candle. The author believes that Luce and Hadden, though competitive, were also deeply attached—“love” is a word he uses to characterize their relationship. This did not prevent Luce from removing his friend’s name from the Time masthead following Hadden’s death (it was not restored until after Luce died, in 1967) or from, in Wilner’s word, “burying Hadden’s role in history.” The author does an excellent job of re-creating the tension, pain and jealousy attending Time’s birth and of showing how the weekly magazine has affected the profession of journalism and the packaging of news.

An intriguing and depressing tale, related with great skill and compassion.