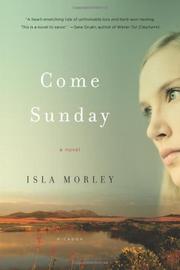 Honolulu and Africa are the settings for this absorbing if at times overemphatic novel. The sudden loss of their beloved three-year-old daughter Cleo in a car accident puts a severe strain on Abbe Deighton’s relationship with her husband Greg, a minister. Their marriage was already showing symptoms of stress, such as Abbe’s flirtation with a colleague, but the couple’s divergent methods of dealing with the pain and despair arising from their loss drive a deeper wedge between them. Abbe is prickly and more confrontational than Greg. During her childhood in South Africa, she watched her vicious, racist father terrorize and threaten her long-suffering mother, who prayed for release and eventually poisoned him. Now, Abbe needs to assign blame and can’t accept Greg’s desire to understand and forgive. A year after Cleo’s death, Greg can take no more and leaves Abbe, who then finds herself forced to return to South Africa to sell the family farm. Events there take an implausible and eventually sentimental turn. Moments of drama, violence and self-sacrifice eventually contribute to Abbe’s rediscovery of hope and generosity.

Intense, unsparing, dark and often downbeat, but distinguished by an impassioned, poetic voice.