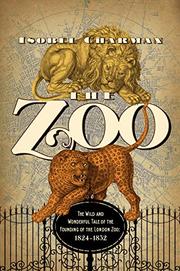 A whimsical work revisiting the English gentlemen of the early- to mid-19th century who envisioned the first Zoological Society of London.

London-based TV producer and author Charman (The Great War: A Nation’s Story, 2014, etc.) delves into an eclectic cast of characters who created London’s first ZSL in 1826. Sir Thomas Stamford Raffles, returning home from a grueling stint in Singapore with the East India Company, resolved to create for London its own Jardin des Plantes, like the one he and his wife had admired in Paris. It would be, he decided, “a place of science, of investigation, of knowledge.” A member of the Royal Society, Raffles galvanized the new ZSL and obtained the land for such a venture in The Regent’s Park, designed by John Nash and located in the north of London. Upon Raffles’ death in 1826, the young architect Decimus Burton took over the challenging project, which included the designing of buildings over five acres where “humans could comfortably, elegantly, enjoyably observe creatures.” Indeed, writes Charman, Burton “was building for mankind, rather than for beasts,” and it was a huge hit, open to the public for one shilling per head in 1828. It soon expanded through a tunnel taking visitors elegantly from one side of the road to the other (more illustrations or a map would have been welcome). In her charming, engaging narrative, the author deftly assumes the points of view of her characters, in the spirit of a Victorian novelist. These included the first medical attendant, Charles Spooner, who was eventually dismissed because of the high mortality rate of the exotic animals (the wet, cold English winters were a detriment to many of them), and Charles Darwin, a corresponding member of the ZSL when he returned from his Beagle exploration in 1836, keen to observe the animals himself.

A deeply researched, terrifically entertaining exploration of the London Zoo “through the eyes of some of the people who made it happen.”