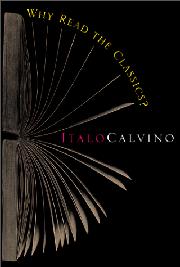 WHY READ THE CLASSICS?

An irrepressibly lively collection of the late Italian novelist’s literary criticism. Between the 1950s and his death in 1985, Calvino (Fantastic Tales: Visionary and Everyday, 1997, etc.) published many occasional pieces on classic works and authors. Most of these, which appeared in newspapers or as prefaces and speeches, are only a few pages long. In 1991 his wife assembled a collection of these writings that is fuller than those included in the two compilations published during his lifetime. Consequently, 11 of the 36 essays here have already been published in English. The duplication matters little: Calvino is such a congenial guide to his personal canon of great works that one is grateful to have all the essays together. The opening piece, from which the title of the book is drawn, democratically meditates on the importance of classics, which are books that “imprint themselves on our imagination as unforgettable.” So Robert Louis Stevenson has as much claim to the category as Voltaire or Henry James. Eclectic in taste and interest, Calvino ranges widely from the ancient world (Homer, Xenophon, Ovid, Pliny) to early modern (Galileo, Cardano, Ariosto) to modern (Voltaire, Diderot, and on to Queneau and Borges). What interests him most, though, is narrative fiction from Robinson Crusoe to the present. The continental heavyweights are represented in force (Stendhal, Tolstoy, Flaubert, Balzac), but Anglo-American fiction seems to hold a special appeal for him. He offers essays on Defoe, Twain, James, Stevenson, Dickens, Conrad, and Hemingway. Of course not every important writer can be included in such a work, and certain writers are strikingly absent: Kafka, Shakespeare, Joyce, and Proust, to name just a few. Calvino never set about to write an inclusive work. Still, given his importance in contemporary letters and given the posthumous character of the book, this collection would have benefited from a good afterword on the writer as critic and his tastes. It would have been interesting to know what he didn’t like and why. Brisk and unpretentiously sophisticated, Calvino’s literary essays are invigorating, thought-provoking, and pleasurable reading.