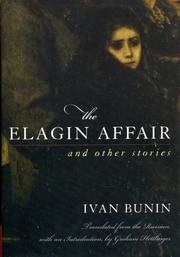 From Russia, with love (and unfulfilled yearning, crushing despair and profound heartache).

Bunin, now forgotten by all but a handful of specialists, won the Nobel Prize in literature in 1933. A successful and well-respected writer in Russia, he settled in Paris after the Revolution, where he maintained himself by writing about a culture that had virtually disappeared by the time he got to France. The six stories collected here were written between 1900 and 1944. All are set in either a fiercely cosmopolitan Moscow or a tenderly bucolic Russian countryside. A few, like the eponymous “The Elagin Affair” and “Mitya’s Love,” are long enough to count as novellas; others seem, in comparison, like sketches. Bunin’s greatest strength is his ability to focus intensely on the consciousness of a single character. His stories, packed with sensory information and grounded by long, clause-heavy descriptions, work to find the mysterious moment at which objective reality becomes part of the interior world. Some stories, like “Mitya’s Love,” spend paragraph after lavish paragraph on minute sensory experiences—the thick air of the country on a languorous afternoon, the sound of a woman’s laugh, the long wait for a short letter. But many of the stories promise a bigger payoff than they can deliver. Bunin’s prose is always stronger than the stories’ plots, which often seem to end rather abruptly, often by introducing a relatively clichéd and unsatisfying convention more indebted to melodrama than to the 19th-century realists he otherwise resembles.

Taken together, the stories make a worthy addition to the archive of great Russian writers of the 19th and 20th centuries, even if individually, their prose spills over the narrow confines of Bunin’s plots.