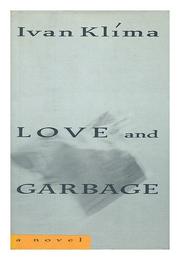 One of those classic semiautobiographicl European novels in which ideas are as important as plot, by Czech writer Kl°ma (My First Loves, 1988). A dissident writer, living in Prague and unable to get published, finds a job sweeping the streets, but this daily pursuit of the city's trash becomes as much a journey into the writer's past as a meditation on literature in general, Kafka in particular, and the conflict between freedom and guilt. A childhood survivor of the Prague Ghetto, and haunted by the deaths he witnessed, the writer found his salvation in literature: ``I realised the amazing power of literature and the human imagination generally: to make the dead live and stop the living from dying. I was seized by wonder at this miracle...and there began to spring up within me a longing to achieve something similar.'' He relates his long extramarital affair with a sculptor; introduces his fellow- sweepers, all victims of the system; and recalls his dying father, an engineer who loved numbers and life. Oppressed by guilt and painful memories of the affair he ended because he was unable to live a lie, he sees the world on the edge of the Apocalypse, and filled with garbage and the lies people tell. When his father dies, he gives up his sweeping joba job undertaken, he decides, because ``Man longs for a cleansing but instead he starts cleaning up his surroundings. But until man cleanses himself he's wasting his time cleaning up the world around him.'' Remembering his father's laughter, and his advice never to cry, he feels a measure of peace. Rich with allusion and insights, the deceptively simple story sometimes gets lost in his musings, but Kl°ma's portrait of a man and an artist trying to live honorably in his personal and professional life is a noteworthy achievement.