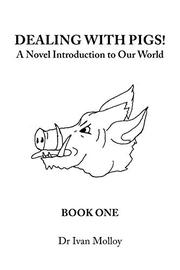 A scathing critique of class, politics, and greed presents a fantasy world comprised of pigs.

War rages between the pigs of Mudwallow and Hamcorner, as the elite among the Wallowites, known as snouters, seek to expand their power and fortunes through military means. As the snouters’ mercenary soldiers, the boars, and the Holy Pomponer, the head of the Wallowites’ faith, hoard food and wealth during this time, it is the weary, working-class trotters who go without. While the fight bogs down due to self-serving double-crosses and incompetent leaders, a trotter named Hunkle finds himself in the role of an unlikely revolutionary. His cousin Crumpet has produced a series of writings on pigolitics and pigolosophy that demand equality and a rejection of snouter rule. Along with the vengeful rebel Snooper and Hunkle’s son, Whiskers, Crumpet establishes the snotters, a group that rejects the strict class structure and the worship of the Pomponer’s “Great One,” a deity that supposedly blesses pigkind from the Black Mountain volcano. Unrest grows, and the snotters are able to gain advantages over the ruling upper classes through utilizing the prized badapple, a tree with explosive properties and technological possibilities, as well by taking advantage of the lies of the religious caste, which is hiding that the Great One is no god. Molloy (Ceasefire! The Ivan Molloy Story, 2018, etc.) crafts a mini-epic in the style of Game of Thrones and The Lord of the Rings that’s filled with scheming bad guys and harrowing battles. The blood, mud, and tragedy of the clashes are portrayed in a particularly visceral and heartbreaking fashion despite the swine participants. The parallels between Pigworld and real-world politics are numerous and enlightening but sometimes a little on the nose—the suicide-bombing “Baconers” who worship a god separate from the Great One scream Islamic terrorist stand-ins while Crumpet’s snotter philosophy mirrors Marx and Engels. The novel is full of maps, blueprints, and the author’s illustrations of pigs of importance, presented as if drawn by the book’s characters. Along with the endnotes, this material elevates the story’s already impressive worldbuilding.

While a bit obvious, this rousing animal tale delivers an important political message.