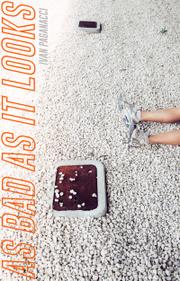 AS BAD AS IT LOOKS

Paganacci (Everything Is Always Perfect, 2018) offers a collection of apocalyptic fiction and poetry.

The author fixates on all things dark, disturbing, and morbid in this series of short stories, interspersed with brief, free-verse poems. He begins with “California,” in which a caretaker for an elderly ex-Navy man and a former showgirl must figure out why they’ve seemingly fled their home. A boy and his Jack Russell terrier inadvertently discover an extraterrestrial portal in “Hole in the World” and a retiree hurts his ankle on a hike and resorts to drastic measures to get out of the desert alive in “Water.” Paganacci sprinkles sci-fi concepts throughout these tales, including inventions, such as an implant that can be used to kill oneself in an emergency, and deadly creatures, including an 8-foot, tentacled terror that cocoons its victims. The author also plays with magic, time travel, and the idea of duplicates. Not everything in the future is necessarily bad, however; one society, for instance, has legalized marijuana, banned prescription drugs, eliminated guns, and eradicated war. The character descriptions throughout this collection are sharp; take Donny, a young man who laments that “I’m good at remembering details but I can’t follow instructions, which makes no sense to me.” The narrator of “Hot Shower” struggles with “depersonalization syndrome,” an inability to recognize himself as human. Instead of an arm and a hand, for instance, he describes “an outgrowth with a hinged flap at the end”; instead of eyes, he has “glassy organs that function as visual sensors.” Paganacci’s poems don’t quite jibe with the short stories’ themes, however, and they add little to the book as a whole. Some lines even seem nonsensical: “An apple being murdered by a bullet / Caught red-handed at the speed of surprised light.” Still, the stories are sufficient reason to read this book.

An eerie homage to the dystopian genre.