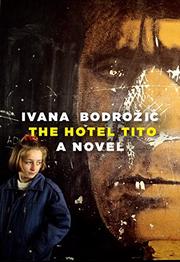 A young girl is caught in the turmoil of adolescence and war.

Drawing on her own family’s experiences during Yugoslavia’s struggle for independence in the 1990s, poet and fiction writer Bodroži? (The Hole, 2016, etc.) creates a captivating tale that earned acclaim and literary awards when it was published in Europe. Translated by Elias-Bursa?, the story begins when the slyly observant narrator is 9 and suddenly is sent, with her older brother, from their home in Vukovar, on the Croatian-Serbian border, to the seashore. Although her parents do not explain why, she has “a sneaking feeling it has to do with politics because everybody talks about politics all the time.” A few weeks later, the children’s mother arrives, but their father remains in Vukovar to defend Croatia against the Serbs, a long siege that ends in the imprisonment—and, the family later learns, the murder—of 400 men, her father among them. The remaining family members become refugees, housed in one shabby room at the former Political School in Kumrovec, which they sardonically dub the Hotel Tito, after longtime Yugoslav president Josip Broz Tito, a native of that city. Living on a meager displaced family’s allowance, they find a community consisting only of other refugees. Repeatedly, they petition the government for an apartment. “Believe me,” the mother writes, “it is much harder for the families of the missing because there are things we can never accept, and the uncertainty is crushing us.” Equally crushing is widespread disdain toward refugees. Against the backdrop of political news and rumors, the narrator grows up, setting aside Barbie dolls for disco clubs, dealing with jealousy, hurt feelings, her brother’s volatile anger, her mother’s depression, and her own mysterious emotions. “How cool it was to be all melancholy and sighs,” she reflects. Desperate to leave the Hotel Tito, she is elated when her excellent grades make her eligible for a fine secondary school in the capital city of Zagreb. In the new setting, though beset by grief and fear, she is buoyed by hope.