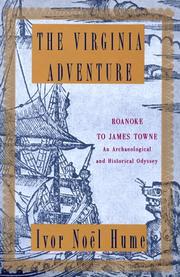 Roanoke to James Towne: An Archaeological and Historical Odyssey

Grounding his story in documentary and fragmentary archaeological evidence, British archaeologist Hume (Martin's Hundred, 1982) tantalizingly reconstructs the history of the earliest English settlements in America. The British drive for colonies grew out of England's 16th- century rivalry with Spain; hence the earliest English settlements in America were planted in the midst of the ``Terra Florida'' that explorers had claimed for the Spanish crown. After some abortive attempts to create an English foothold in the New World, Sir Walter Raleigh sent more than 100 English colonists under gentleman-artist John White to lay claim to the land the Elizabethans called ``Virginia.'' They landed in Roanoke, in what is now North Carolina, in July 1587. After establishing a fort and colony, White and some members of the group returned to England. When several more English ships arrived in Roanoke in 1589, the colony had vanished with few, cryptic traces. Hume painstakingly reviews the sparse evidence, both from contemporary journals and from modern forays over the site, of the Lost Colony: Almost surely, the settlers were massacred by Indians, although little evidence exists today either of their presence at Roanoke or of their fate. Similarly, Hume tracks the more successful but often tragic history of the Jamestown settlement from its birth in 1607, using artifacts and journals of the period to trace the colony's growth from its unpromising beginning as a small disease-ridden group of adventurers into a prosperous community. Hume focuses particularly on the relationship between the settlers and the Indians, which went from mutual idealization to demonization within a few years. This culminated in the 1622 slaughter by the Indian chief Opechancanough of English settlers in the area around Jamestown and an English backlash against the natives that spelled the ultimate doom of their culture. Hume breaks little novel historical ground, although he eloquently recounts the archaeological record and brings alive the lost settlements of the early American past with wit and style. (164 illustrations) (Book-of-the-Month Club selection)