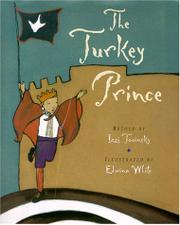 In this earnest retelling of a Hasidic tale, a young prince with feelings of inadequacy concludes that he is really a turkey, and so takes up residence under the kitchen table. Conventional healers can’t shake his conviction. Finally, one comes along who takes a different tack, announcing that he too is a turkey, getting down on the floor with the prince, but suggesting that there’s no reason why turkeys can’t wear human clothes, eat human food, etc. Years later, when the prince, now a beloved king, hears that one of his young subjects is living under a table, he knows just what to do. Several of the oddly dressed figures in White’s spacious, slightly offbeat illustrations seem to be part animal themselves, suggesting that the prince isn’t alone in not feeling up to embracing his role in life. A debut for author and illustrator both, this imparts a perceptive lesson in tolerating foibles, one’s own as well as those of others—as does Art Spiegelman’s briefer (but funnier) comic-book version of the story in his Little Lit: Folklore and Fairy Tale Funnies (p. 1432). (Picture book/folktale. 6-10)