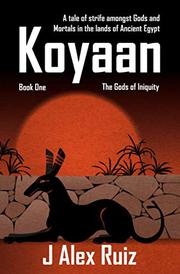 This debut fantasy follows the travails of an ancient Egyptian peasant girl impregnated by a god.

Thirteen-year-old Anggun is newly a woman. In the peasant village of Arrousa, her family performs the Dawning Ritual by leaving beer for Ra, God of the Day. Nunuco, Anggun’s mother, is a widow and doesn’t take the ritual as seriously as her father-in-law, Iawii, would like. If the family’s offerings please Ra, he will take Anggun to heaven, where she’ll live in comfort and beauty. Later, as Anggun sings in a field, she does attract a deity. Set, the God of Storms, approaches in the form of a black snake. He eventually morphs into a powerful man, forcing himself on the girl before vanishing. When Anggun’s twin brother, Gunang, and their younger brother, Buku, find her, she’s burned but otherwise uninjured. At home, Anggun’s belly grows with shocking speed. Unbeknown to anyone, Nunuco removes a red scale from her daughter’s body, keeping it hidden. Iawii believes that Anggun “brought this on herself” and trusts in aid from the High Priests of Horus. But Nunuco learns that Iawii’s brother, Mekheb, is a Priest of Set living in the city of Neqada. Surely, he can help with Anggun’s supernatural pregnancy. Ruiz blends impressive historical research, family dynamics, and frank depictions of sex in her series opener. Readers learn not just about the narrative’s principal deities, but also about others who shaped ancient Egyptian life. “Ptah created Himself out of Chaos,” Mekheb says of the god who originated thought, “So, when you think to yourself, that is an aspect of Ptah in you.” The author also reveals lovely fusions of nature and architecture, as “orange light streamed between long rows of tall red and black columns that lined the temple’s outer courtyard.” Still, even readers with strong stomachs should prepare for Anggun’s intense sexual assault and, later, Gunang’s descent into drug use and prostitution. Egypt’s Crown Prince Imseti, who’s sure that Set’s child is a girl and is determined to pair with her, is the perfect villain to enliven the sequel.

A robust historical fantasy showcasing the Egyptian pantheon and the strength of family.