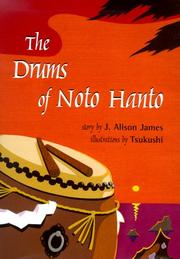 THE DRUMS OF NOTO HANTO

On Noto Hanto, which points “upward like a thumb into the Sea of Japan,” a wealthy coastal village is under threat from a warlord seeking riches. They have little in the way of weapons, but they do have their drums—drums of all sizes, usually played at each change of season. The children provide the idea of using terrifying masks to make the warlord, Kenshin, and his men “melt” in fear. The samurai arrive by boat, spotting gruesome monsters on shore and hearing the overwhelming noise of the drums; frightened by the spectacle, they never disembark. The people of Noto Hanto have celebrated this 1576 victory annually in a mask-wearing, drum-beating ceremony. At first glance, the colorful illustrations have the precision of computer-generated art, but they are actually scenes composed of meticulous cut-paper designs. The dimension and texture of these complement James’s sound-effects-laden text; the suspense builds with each beat as the villagers fight to save Noto Hanto, and readers are certain to have the pounding of drums in their ears by the story’s conclusion. (Picture book. 4-8)