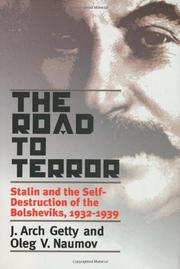 THE ROAD TO TERROR

Stalin and the Self-Destruction of the Bolsheviks, 1932-1939

A further batch of remarkable documents from the archives of the Soviet Central Committee, including secret transcripts of their meetings, police reports, and even the last letters of Bukharin and Yezhov (the head of the NKVD during the Terror) before they were executed. Getty (Modern Russian History/Univ. of Calif., Riverside) and Naumov (deputy director of the Moscow archive) have performed a real service in producing these archives, though a less satisfactory job in explaining them. In truth, the documents, revealing though they are—they include the ruthless interrogation of Bukharin by the Central Committee, and the quotas of those to be shot for each republic—are almost as revealing for what they are not. They are almost devoid of any utterance (at least on the part of the Stalinists) that is not phrased in the most vituperative and unconvincing propagandistic terms. The authors are persuasive in showing that Stalin seemingly had no fixed plan of terror, that he frequently tried to show moderation, and that he procrastinated, particularly in deciding Bukharin’s fate. They are considerably less successful in arguing that “even Politburo members seem to have genuinely believed that myriad conspiracies existed,” largely on the basis of the fact that the implacable Molotov continued to argue for them in them in the 1970s. The sheer extent and absurdity of the charges (that veterinarians were engaged in a massive effort to sabotage animal husbandry, for example) suggest a different and simpler explanation, that of stark fear and self-preservation. The authors argue against a complete acceptance of the fear theory by claiming that the Politburo members were “hard men,” but the pleas sent by Bukharin and Yezhov to Stalin to spare their lives suggest the reverse. Nonetheless, one of the most revealing and chilling books to have emerged from the outstanding efforts of the Yale Annals of Communism Series. (42 illustrations)