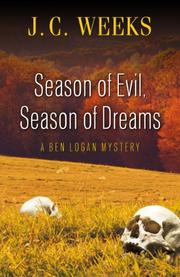 SEASON OF EVIL, SEASON OF DREAMS

A grisly discovery in South Dakota’s Black Hills reveals a series of crimes against children and lays the groundwork for more of the same.

If only retired schoolteacher Lorna Hollingsworth hadn’t followed her dog to the clearing, she never would have found the little skull, and the Gold Hill police department wouldn’t have found eight more. Now Lorna’s former pupil, Police Chief Ben Logan, has to figure out why someone killed the children over a period of several months and arranged their skulls in such a meticulous geometric pattern. Even worse, the killer, whose thoughts are laid out in italicized interchapters, hears that his secret has been discovered and his dark, demented purpose shattered, and vows to start over with a fresh set of victims. It’s not long before he’s claimed his first prizes, a pair of 14-year-old students. Meanwhile, Ben’s only lead is an Aztec medallion he brings to Prof. Morgan Patterson, an expert in Native American Studies who’s in the area to do fieldwork, hours before it vanishes from his office, costing him a suspension from his job. Will Ben, who continues to work the case with only the help of his right-hand officer Jim Donne and his new friend Erica Swift Hawk, a Lakota psychologist visiting from Los Angeles, be able to prevent still more murders of still younger victims?

Not much mystery or real suspense, but Weeks shows a nice feeling for her people and their town in this modest series kickoff.