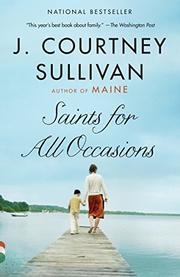 SAINTS FOR ALL OCCASIONS

Of Catholic guilt, silences, and secrets: an expertly spun family drama, a genre Sullivan (The Engagements, 2013, etc.) has staked out as her own.

Theresa and Nora, Irish sisters, have long since parted company, the break an event that neither has spoken of for half a century. Now, as Sullivan’s latest opens, Nora’s son Patrick has died, and as the family comes together to see him off, long-hidden secrets are unveiled. A whole constellation of them swirls around Theresa, explained away as “nothing more to Patrick than a distant aunt.” But how to explain the truth? How to make up for all the choppy water that has passed between the two sisters, separated by an unbridged Atlantic? How to forgive one another? Sullivan lets some of the critical details out early: Patrick was a drinker, and he died in a drunken car wreck. Theresa was a religious whiz kid, more Catholic than the pope; quizzed by the bishop, she reels off doctrine to the letter, prompting the cleric to say to her father, “You’ve got a very bright child there. Are all your others as sharp as that?” The answer, “Heavens no. We don’t know where she came from,” speaks volumes about the story that will follow, though for all her knowledge, no one really expects Theresa to wind up in the nunnery, torn up by the more or less ordinary events of adolescence and given to saying “a string of novenas for forgiveness” for her perfectly excusable transgressions—excusable now, of course, but not then, and not in the Ireland of the girls’ youth. Sullivan is a master at making a sideways glance or a revealed detail add to a larger picture that she takes her time in building, one that might just as easily bear as its title a wise remark in passing: “Loving and knowing weren’t the same.”

Sullivan often approaches melodrama, but she steers clear of the sentimentality that might easily have crept into this tale of regret and nostalgia.