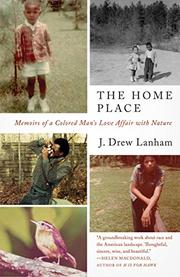 Memoirs of a Colored Man's Love Affair with Nature

An ornithologist writes about himself as a member of a rare and perhaps endangered species: the African-American birder.

Lanham (Wildlife Ecology/Clemson Univ.) describes himself as “an unusually colored fish out of water,” as someone who doesn’t “fit the common calculus.” He describes his upbringing in the rural South in a rapturous way that shows how nature became his religion, but he also knows why many of his race associate the land with harsher memories, backbreaking labor, and being treated as less than equal or even human. As he traces his singular path from the family homestead through higher education—he switched majors from engineering to zoology and lost his scholarship—Lanham occasionally succumbs to an excess of literary flourish and a penchant for alliteration in particular. In the space of less than five pages, he writes of “the sylvan savior of southern soil,” “the priceless places where nature hangs by tooth, talon, and tendril,” and “something furred, feathered, finned, or scaled that scurried, swam, or flew.” Yet when the published poet gives way to the memoirist, his experiences require no flowery expression. Perhaps the most powerfully provocative chapter is “Birding While Black,” which begins, “it’s only 8:38 a.m. and I think I might get hanged today.” Apparently, a lone black man with binoculars arouses suspicion in neighborhoods where Confederate flags abound. The author is also illuminating on what some might see as the contradiction in values between his passions for birding and hunting, in what he calls “my transition from a wine-drinking, cheese-eating ecologist to a beer-swilling, venison-chewing wildlife biologist.” Ultimately, he brings the memoir full circle in a search for roots that expand his sense of identity, as the home he once knew is not what it was but remains forever in his memory and his heart.

A shrewd meditation on home, family, nature, and the author’s native South.