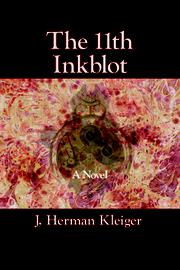 The young son of a watchmaker with a fascination for art begins creating inkblot drawings in this engrossing debut novel by Kleiger.

Anton, the son of great Russian Jewish horologist Herman Zellinksy, narrates this novel about a family in the turn-of-the century village of Zastavia. The young Anton dreams of following in his father’s footsteps, but his “golden brother,” Chaim, has been chosen by his father to learn the craft. Anton is ignored and spends time drawing in the company of his mother, Marina, who is of Hungarian ancestry. Marina uses inkblot cards to foretell futures. When Herman discovers this, he throws the cards in the fire, calling her a “gypsy witch.” Anton salvages one inkblot and attempts to re-create more. Marina then disappears, and Chaim reveals a desire to join the Russian army. Herman begins to teach Anton watchmaking, but a discovery causes the younger man to leave home only to be forcibly conscripted by the army. The story tells of Anton’s being reunited with his brother on the Eastern Front, searching for his mother in Hungary, and continuing his education in Zurich. One of the most compelling elements of this well-written and lovingly embroidered novel involves if or how Anton’s life will intersect with that of the Swiss psychiatrist Hermann Rorschach, pioneer of the eponymous inkblot test. Kleiger is a master of fine detail, found in Proustian moments such as when Anton describes an aunt who “always saved extra sweet breads for me”: “To this day, whenever I smell cinnamon or cardamom, I think of Aunt Nadya.” Kleiger also carefully captures the intricacies of watchmaking: “The mechanism consisted of a crown wheel, the rencontre, which was rotated by the power of weights.” The author’s lack of dialogue is unnatural and unnecessarily grandiose when representing a village boy such as Chaim: “I seek the path of triumphant warrior. I will lead men with proud sounds of trumpets announcing the charge.” Still, this is a spellbindingly measured narrative that entertains and enthralls.

A unique and captivating story of a young mind torn between science and art.