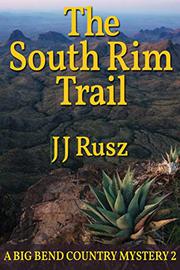 A young sheriff’s life is complicated by a conflicted girlfriend, a teenage TV star, and a murdered artist in the second book in Rusz’s (The Window Trail, 2019) Big Bend Country Mystery series.

Professor Claire Harp’s 18-year-old brother, Alex Harp, is the star of a television sitcom who’s just about to launch a film career. He’s visiting her in West Texas, accompanied by his friend Piper Robinet, who plays his love interest on the TV show. Alex wants to camp overnight with Piper in Big Bend National Park, but their public relations people soon turn their hike on the South Rim Trail into a media event. Later that night, however, Piper goes missing from the campsite; it soon becomes clear that the circumstances of her disappearance could also help investigators determine who killed an artist some time ago, who’d been painting in the park. Potential perpetrators include drug runners or, closer to home, the artist’s stepdaughter and an ambitious young photographer. Once again, Claire’s boyfriend, the handsome and stalwart Sheriff Clayton Shoot, is seeing the case through by interacting with colorful locals and sorting through various clues with other law enforcement officials. Meanwhile, he and Alex bond at Clayton’s family ranch, where the actor is staying to avoid his fans and members of the press. Clayton’s abrasive older sister, Beatrice, bonds with Alex, too, over their mutual interest in his upcoming starring role in a film production of Romeo and Juliet.

Puzzlingly, Claire has a less active and less sympathetic role in this series entry; in the first, she helped Clayton solve a brutal crime. Here, she wrestles with her mixed emotions about Clayton—he proposed, she refused—and wonders whether to move on in her life as she fields job offers from prestigious publishers and universities. She’s certain that Clayton, who’s now the sheriff of the largest county in Texas, is too deeply invested to ever want to leave it. Their relationship issues thread through the novel, and the author eventually gives Claire an epiphany, only to abruptly undercut it in the book’s last scene—an overly obvious setup for the next book. Claire also spends an inordinate and off-putting amount of time trying to determine if Alex is gay. For the most part, though, the novel is an appealingly nimble, character-driven tale, deepened by the author’s informed, eloquent recreation of the series’ far–West Texas setting, where a switchback is described as “lined by rocks that might have dropped from the moon” and the “sweeping panoramas of distant mountains and flat fields of skeletal bushes” are said to be “freaky, brutal, yet oddly beautiful.” A sighting of a sheeplike “aoudad” may send readers to the encyclopedia. The cast is as diverse as the locale is: Claire, Clayton, Alex, and Piper are among the white characters; Piper’s boyfriend, Tyler Tribble, and Chief Ranger Velma Furcron are African-American; a minor teenage character named Gracie Allen Yazzie is Navajo; and Clayton’s deputy, Alonso Rangel, is Hispanic.

A well-paced mystery with an authentic setting and numerous engaging characters.