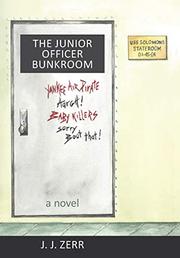 In Zerr’s debut novel, two naval pilots come to terms with military life at the end of the Vietnam War.

The year is 1970, and the policy of “Vietnamization” has decreased the number of combat troops in Vietnam, leaving America’s young men adrift, including Jon Zachery and Amos Kane. Late one night, Jon asks his wife, Teresa, if she remembers when he was in basic jet training in Meridian, Mississippi. He tells her, “the squadron XO there said I had a magnet in my butt that attracts trouble.” Jon’s ambition to serve his country—and the reality that the Vietnam War is over—leads to an existential crisis: as the officer said, he needs trouble to thrive. For Amos, the transition between the pro- and anti-war movements is no less fraught. With the help of girlfriend Charlotte Wilkins, Amos turns his back on the war effort and adopts an anti-war philosophy. With four years of service left, however, Amos is bound by his commitment to the Navy. Amos and Jon are stationed together aboard an aircraft carrier in the Tonkin Gulf, and their different attitudes toward war illuminate the struggles of those in combat. The two men now must face the futility of military action in the absence of a clear objective. In a letter to his wife, Jon writes, “I was so driven to get out here, to the war. Now that I’m here, it doesn’t amount to much.” While Zerr skillfully weaves military details such as the career trajectory of a military professional and uncelebrated hours of boredom throughout the novel, the true brilliance of the book are his depictions of the complexity of war and the ideology that sends young men into battle.

An authentic, well-considered work of military fiction entwined with a coming-of-age tale.