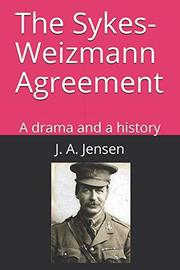 A Drama and a History

In this debut play, Jensen dramatizes the efforts of a real-life American Zionist to bring the United States into World War I as part of a plan to secure British support for a Jewish state.

In 1903, Horace Kallen, a Princeton University senior and protégé of American philosopher William James, is committed to the cause of Zionism—the establishment of a Jewish homeland in British-held Palestine. Many immigrant Jews, including the Silesian-born Kallen, have become successful in France, the United Kingdom, and the United States, but as an increasing number of impoverished Jews flee oppression in czarist Russia, public opinion in the West regarding their immigration is beginning to sour. With the help of his mentor, famed attorney Louis Brandeis, Kallen builds a network of prominent American Jews committed to the establishment of a Jewish Palestine. When World War I breaks out, an opportunity arises. Chaim Weizmann, a British chemist and Zionist, offers a proposition to Sir Mark Sykes, a British official: If the Zionists in the United States can bring America into the war on the side of the British, then the British could reward them with a Jewish state in Palestine: “We have connections to President Wilson’s closest advisors….We also have some friends in the American press,” Weizmann claims. “If the American newspapers were to sell the war to the public… President Wilson would be more inclined to enter the war.” This plan doesn’t please all Zionists, and it’s not the only secret plan that’s underway to try to secure a Jewish state, but it proves to be the best opportunity for Kallen to achieve his goal. One question remains: Will he put his adopted country at risk in order to achieve something—Israel—that hasn’t existed for millennia? Jensen seeks to dramatize the relatively obscure titular event, but the fact that it overlaps with a highly significant historical period means that he’s able to include a number of famous figures among the dramatis personae. In addition to Brandeis, readers encounter U.S. Ambassador to the Ottoman Empire Henry Morgenthau Sr., British Foreign Secretary Arthur Balfour, and U.S. President Woodrow Wilson. As a result, the author largely achieves his goal of presenting the era’s diversity of opinion regarding the potential future of the Jewish people: “Some of the anti-Zionists in the United States say that the ancient land of Israel is gone forever….They say that America is the new Zion,” Brandeis says at one point. The play’s scenes involve a large amount of exposition, and the work as a whole often seems aimed more at providing education than entertainment. However, Jensen manages to keep the play engaging. Two characters are particularly well-drawn: Kallen, who may be new to many readers, and Brandeis, who’s well-known but not often dramatized. Even if readers are familiar with the general sweep of this work’s history, many won’t know the specifics of its particular incidents—and they’ll likely be curious to see how they play out.

An informative drama about an important chapter of Zionism.