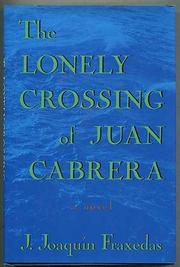 THE LONELY CROSSING OF JUAN CABRERA

Juan Cabrera, a Cuban born of landowners but too late to emigrate in the first great wave to Miami, finally has his opportunity to become a bolsero, a rafter, making escape from Castro's brutal failure by crossing the straits to Florida and freedom. In a motorless vessel fashioned out of three inner-tubes, he and two other men set off into the current, encountering in sequence a Cuban Navy patrol boat (kills one of the rafters), a hurricane, hunger, a shark (kills another), hallucinations, and finally rescue near the shore. But this rescue comes at the cost of the life of the pilot who spotted him; the flyer, Alberto, is a refugee and Bay of Pigs veteran whose plane crashes after radioing back Juan's coordinates. First-novelist Fraxedas has a bit too much too pack into so short a book—the sociology of the ÇmigrÇ community in Miami, in the persons of Alberto and a Coast Guard officer, Vivian, seems especially abbreviated, cramped—but the sea scenes are stark, affecting. (Also: The publisher is releasing this in Spanish simultaneously, in a separate volume—which seems to put money where usually only multiculturalism's mouth is. They're to be applauded.)