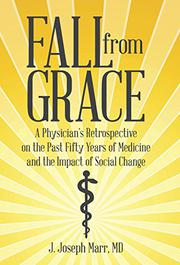 A physician laments the rise of corporations and the decline of the doctor-patient relationship in American medicine.

Marr (Biochemistry and Molecular Biology of Parasites, 1995) asserts that American medicine has been radically changed by technological innovations, the growth of private and public health insurance, and the profit motive. Over the past half-century, these factors have “altered medical care almost beyond recognition.” Although technology brought many advances, the advent of “Star Trek medicine” helped distance doctors from patients by inserting “physician extenders” —medical assistants, nurses, and techs—into patient care. Outside clinics mainly staffed by these workers grew as insurance companies attempted to control costs. Private and government insurers tried to tamp down rising health care costs by saddling physicians with complex and time-consuming cost-control programs. But doctors aren’t really the problem, Marr argues. Physicians account for only about 10 percent of America’s medical bill. Technology, profits, and other factors have driven the explosion in costs, along with added layers of bureaucrats, managers, and executives. “Medicine lost its soul when big business entered,” Marr writes. As doctors became more like team managers than personal physicians, they distanced themselves from patients, who were “relegated to the status of a product.” Ultimately, this will increase misdiagnoses, he avers. Compared to other advanced nations, the U.S. has extraordinarily high per capita medical costs, while citizens enjoy only mediocre health. Marr has produced a tightly written, forcefully argued indictment of the U.S. health care system that’s well-documented and benefits from his insider knowledge of how hospitals and health care professionals work. His explanation of what led to this mess is succinct and clear. Although it’s hard to feel sorry for handsomely paid physicians, Marr’s argument that they’re more victims than beneficiaries of the corporatized, bureaucratized system rings true, though he could bolster his case with more details about just how much of the massive U.S. medical bill bureaucracy, for-profit hospitals, and insurance companies account for. He’s probably right, however, that this sick system will ultimately crash—a prediction that calls into question his perhaps too-pessimistic conclusion that the system’s structure can’t be changed.