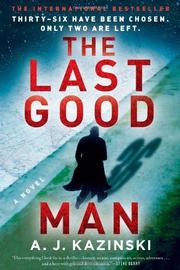 Working on his own, a beleaguered Italian cop, Tommaso, uncovers a strange wave of international murders.

According to Jewish scripture, there are 36 "good," righteous people unknowingly assigned to protect civilization. One by one, from Chicago to Mumbai, they are being killed. Only two are left alive. It's up to Tommaso and Bentzon, the Danish cop he tags across the language barrier, to save humanity. It isn't easy to identify the targets; not all of the victims were humanitarians or activists. But the race is on when Hannah, a brilliant, disheveled, data-crunching astrophysicist teamed with Bentzon, devises a chart of where and when each of the killings was or will be. The final two, conveniently enough, are planned for Copenhagen, where President Obama is attending a world climate conference and Bentzon must contend with an Arab terrorist on a deadly mission, and Venice, where Tommaso's efforts are informed by a strange final warning from his dying mother. Writing under a pseudonym, Danish filmmaker Anders Rønnow Klarlund and Danish crime and children's novelist Jacob Weinreich have concocted a fast-paced, smartly plotted book. Described in Denmark as "Dan Brown meets Stieg Larsson," the book owes a lot more to Brown's occultish puzzle novels than Larsson's ultra-violent, socially aware thrillers. As dire as the situation is, this is a good-humored book with a cast of lively and likable characters—none more than Hannah, who goes from grieving her dead son and the death of her marriage to deriving excitement from working on the most gripping problem anyone has ever faced to dying and coming back to life nine minutes later.

The co-authors successfully keep the wheels of their end-of-the-world scenario spinning.