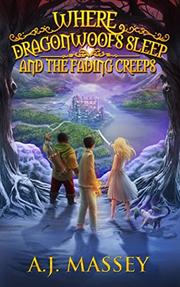 WHERE DRAGONWOOFS SLEEP AND THE FADING CREEPS

This debut YA novel transports three teenage heroes to a magical realm that may vanish before they can save it from a despotic ruler.

Thirteen-year-old Ben Young has awoken in a forest beneath a red sky. He heads for a clearing, where he meets a girl collecting glowing flowers. She says she’s protecting them against something called the Fading. Ben next encounters a pair of faeries who lure him into a net that dangles him over a boiling swamp. Luckily, two elves save him from the faeries with arrows. Accompanying the elves is Marcus Cooper, a 13-year-old boy, who explains that the Fading is causing the spread of white nothingness on this world, Meridia. But Ben’s watch—a gift from his father that has stopped at midnight—might be the key to halting the Fading. Meanwhile, at the Blue Glass Palace, 13-year-old Queen Regent Avery Hopewell, like Ben, remembers little of how she comes and goes from Meridia. Fate has placed her in the path of Ben and Marcus but also in the way of the evil Sovereign, who plans to dominate all. Can the three teens reach the Creator’s Citadel and preserve the multifaceted beauty of Meridia? In this novel, Massey evokes the charm and psychedelic whimsy of classic fantasies like The Last Unicorn and films like Labyrinth. The heroes may pop in and out of Meridia via dreams, but their waking lives are just as dramatic as battling dark armies. Avery, for example, lives in a group home and still occasionally wets the bed yet has the intellect to be a catch for any foster family. As the teens tackle fantasy evil, they gain the confidence to address bullies and other real-world problems. The author’s dialogue, a buffet of snark and riddles, consistently augments the imaginative story. The dragonwoofs, a trio of underwhelming winged dogs who accompany the group, prompt Tamerlane the elf to ask, “How will these creatures learn to use their abilities if you keep sheltering them?” In this striking tale, Massey encourages parents to let children make mistakes as they explore their talents and identities.

A fantasy with tremendous heart and a magisterial execution.