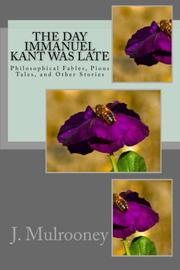 THE DAY IMMANUEL KANT WAS LATE

Mulrooney (An Equation of Almost Infinite Complexity, 2016, etc.) begins this work on a high note with the title story, in which he presents anthropomorphic accounts of the lives of bees, flowers, weeds, and ants. To his credit, he manages to convey the imagined emotions of Fraulein Krause, a worker bee facing the end of her life span, and Esther, a flower that endures the pollination process, portrayed in brutally sexual terms. Another standout narrative with a surreal flavor is “The Heart of Ernest Bodkin,” in which the title character is so desperate (and unable) to end a relationship that his heart literally ends up in the toilet. Throughout the book, Mulrooney often employs a textual space and an asterisk to indicate a shift of perspective, a technique that is both helpful and effective, as it guides readers and widens the circles of consciousness. This device adds layers to “St. Christopher, Now Presumed a Legend,” in which Corinne McQueen, an investigative reporter, manipulates all of the parties in a custody dispute that resulted in a mother and son on the run. Through shrewd interview methods and additional footage, Corinne cynically and coolly covers all of her bases as events unfold and public perceptions shift. This story, whose title fittingly makes reference to the patron saint of children and travelers, provides a devastating critique of the machinations of the news media for the sake of ratings and self-promotion. “Our Hearts Are Restless Until” involves the lonely and unattractive Joanne Burns; her sketchy suitor, Mr. Malley (whose wife disappeared years earlier); and her elderly mother. The truncated nature of the title suggests the element of mystery that pervades this piece. Here Mulrooney skillfully shifts the narrative focus from daughter to mother, along with an abiding sense of loneliness that should resonate with readers. Another highlight is “Terry and the Moon and Me,” which documents the heartbreaking effects of leukemia on a family of four. Overall, this collection contains innumerable turns of phrase both lovely and clever, as in this elegiac story, where winter is described as the time when “the inside of your nose feels like glass.”

While it flaunts an unwieldy title and subtitle, this volume offers largely accessible tales that feature creativity, insight, and depth of feeling.

THE END OF THE TWINS
by Saul Diskin
Nonfiction