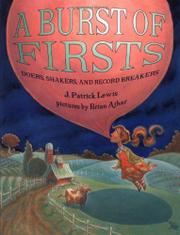 A BURST OF FIRSTS

Lewis leaves behind the serious mood of his Freedom Like Sunlight: Praisesongs for Black Americans (2000) with jocose commemorations of 22 more important notables. He ranges from Ruby Bridges and Michael Jordan to such non–African-Americans as Anna Edson Taylor, the first person to survive a barrel ride over Niagara Falls, and Akebono, the first top-ranked non-Japanese sumo wrestler (“What’s even more surprising than / The belly of a sumo / Wrestler is his very very / Miniature costume! Oh . . . ”). He even leaves the human arena, saluting the 6,000-year-old “Eon Tree” as well as the brontosaurus who, paleontologists suggest, could snap its tail like a whip—“What first broke the sound barrier? / A Brontosaurus derriere.” Ajhar’s big, breezy caricatures add plenty of dash and action; Babe Didrikson holds a golf club in one hand, juggles basketballs with the other, and catches a javelin in her teeth. Levi Strauss high-steps past generations of jeans-wearers; and Susan Montgomery Williams floats through every scene suspended beneath her world-record–sized bubblegum bubble. Readers will sail just as lightly through this gallery of achievers, marveling as they go. (Picture book/poetry. 7-10)