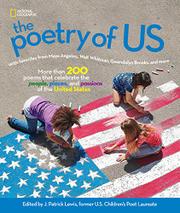 THE POETRY OF US

More Than 200 Poems That Celebrate the People, Places, and Passions of the United States

Some 200-plus short poems about U.S. places, people, and events are superimposed on big, bright landscape and other photographs.

Notwithstanding Lewis’ grandiose claim that these “chiseled words and fabulous photos” present “the underside, backside, inside, and other side of America,” the general tone is blandly celebratory, with only occasional, mild dissension. Robert Frost’s paternalistic “The Gift Outright” (“The land was ours before we were the land’s”) is paired, for instance with Carole Boston Weatherford’s protest litany “Power to the People” (“You Are On Stolen Land”); and Walt Whitman’s “I Hear America Singing” appears, rather obviously, side by side with Langston Hughes’ “I, too, sing America.” The poetry largely steers clear of abstractions, violent imagery, or even, aside from a strongly rhythmic final chant by Leigh Lewis, declamatory slam or hip-hop language. Topics range from natural wonders to local festivals, regional food, salutes to celebrities including John Wayne and Willie Nelson, elegies for Emmett Till and Trayvon Martin, sports, religious observances, and statements of ethnic or national identity. Nods to the diversity of American voices include frequent entries by immigrant and minority writers as well as poems in Spanish, Arabic, and Korean with accompanying translations into English by, usually, the poets themselves. The photos, gorgeous as they are, largely serve a decorative function as only a handful bear identifying captions.