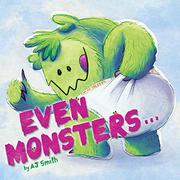 Who says monsters can only be frightful?

Although monsters roar, snarl, grumble, growl and howl, Smith’s playful text asserts that they also know how to behave. The text’s cheeky humor is immediately apparent as the tasks the little monsters carry out involve putting on clean underwear and combing cooties out of their fur. Illustrations extend the text about eating a “well-rounded breakfast” by depicting a box of “Swamp Munch Cereal” with “Free Bugs Inside” alongside a carton of “Mantis Milk.” Such playful intraiconic work affirms the interdependence of art and text, but the occasional indistinctness of the art and the sometimes-cluttered layout of the pages undermine the overall cohesion of the work as a whole. Furthermore, readers familiar with Jane Yolen and Mark Teague’s How Do Dinosaurs… series may find that this title cuts a bit too close to the line between similar and derivative in its execution.