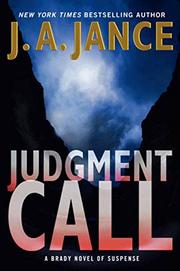 No matter how hard she tries to keep her 15th case strictly professional, Cochise County sheriff Joanna Brady (Damage Control, 2008, etc.) just can’t keep it all from coming back on, and to, her family.

Joanna’s latest case begins on an uncomfortably intimate note with a phone call from her daughter Jenny, 16, saying that she’s found a body while she was out riding her horse up High Lonesome Road. And not just any body: The bullet-riddled corpse, already savaged by buzzards and coyotes, is that of Debra Highsmith, the principal of Jenny’s high school. To Joanna’s consternation, Marty Pembroke, a student who protested his suspension by adorning his Facebook page with a photo of Debra labeled, “DIE, BITCH!,” has been able to post a photo of her corpse tagged “BITCH DIES” because Jenny snapped it while waiting for Joanna and sent it to Cassie Parks, the best bud who’d been snubbing her, and Cassie sent it to everyone else in Arizona. How can Joanna ask her archenemy, columnist Marliss Shackleford, to keep the victim’s identity confidential till her next of kin is notified when (a) her own daughter has been responsible for plastering the image all over the Web and (b) Debra doesn’t seem to have any next of kin—her emergency contact is her secretary, Abby Holder, and she’s left no paper trail to speak of in her time on earth? Another murder in an unexpected venue will shed so much light on the case that Joanna will confront the forgettable killer with 60 pages still to go. It’s not until after the perp’s arrest that the tale really hits its stride, with a series of revelations that turn most of the story into so much prologue.

As usual, Joanna’s domestic problems are more interesting than her caseload. This time, however, fans of the franchise will be rewarded by seeing the two come together with a satisfying jolt.