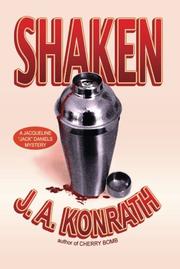 When she comes to, Lt. Jacqueline Daniels is lying bound, gagged and stripped to her T-shirt and panties in a storage locker. Someone has kidnapped her with the firm intention of torturing her to death, and she knows who. It’s the cold-blooded hit man police have dubbed Mr. K, a man responsible for more than 100 killings across the country. Jack and Mr. K have tangled before, and while she struggles in vain to free herself and watches the clock her captor has thoughtfully provided mark off the minutes till he comes to play with her, she reminisces about the time three years ago when she and her partner, Det. Herb Benedict, almost caught Mr. K; the day back in 1989, shortly after she transferred to Homicide, when she was working the case of the tortured escorts and had to decide whether to accept her boyfriend Alan’s proposal; her eventful 29th birthday, when she was still working Vice; and the psychiatrist’s lecture to her and her fellow cadets that raised the question of whether it was more evil to kill people for money or for pleasure. The multiple-flashback structure is hardly original, but Konrath works it with an earnestness that makes his horrors considerably more disciplined than usual (Cherry Bomb, 2009, etc.).

Spoiler alert: Like an R-rated Pearl White, Jack will be rescued repeatedly from certain death, presumably to be staked out again for Stirred next year.