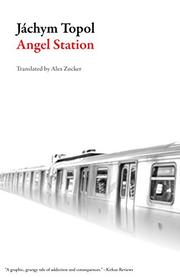 A Czech junkie blows his last shot at redemption.

Zucker explains in a rich translator’s note that this brutal little novel by inventive wordsmith Topol (The Devil’s Workshop, 2013, etc.), published in Czech in 1995, is the third entry in a prose triptych depicting Prague as the city evolved beyond the end of communism. It accomplishes its goal, as does its 2000 no-budget film adaptation (Angel Exit). However, with its harsh colloquial language, colorful descriptions, and heavy focus on drugs, the novel recalls nothing so much as Irvine Welsh’s cult classic, Trainspotting (1996). The book’s main protagonist is Hooks, a meth addict who's spent the last few years bouncing in and out of insane asylums. Unlike Welsh’s colorful cast, Hooks is deeply, painfully aware of what he’s going through. “He knew whoever takes a drug, himself becomes the drug,” Topol writes. “And either they stop or they’re dead. He knew drugs had killed even among the first people. He knew drugs had come down to him through a chain of human bodies. Drugs circulate via bodies, live off the bodies of dead addicts. He knew it but left it for later.” Via a strange accident, Hooks and kind-of-girlfriend Vera cook up a batch of meth so powerful it catalyzes the local Mafia to make an order too big to be filled. Eventually Vera figures out that the secret ingredient in Hooks’ superdrug is his own blood. There’s also some domestic drama with Hooks’ ex Lyuba, who’s pregnant—when Hooks asks her if it’s his, her response is reflective of the book’s laissez faire attitude toward the world: “I think so. You’ve just gotta take it for what it is.” Hooks’ language is starkly evocative, kept whole by Zucker’s insistence on not “normalizing” his unique voice. But it's a very harsh tale, made more so by a devastating ending.

A graphic, grungy tale of addiction and consequences.