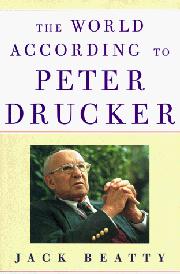 THE WORLD ACCORDING TO PETER DRUCKER

A slim volume by a senior editor of the Atlantic about the legendary figure who invented the business of management and whose theories profoundly influenced modern American corporations, including General Motors. Viennese-born Peter Drucker grew up during WW I and credits Herbert Hoover's generous overseas food programs with saving his life. This early admiration for such an organization, Beatty argues, foreshadows Drucker's lifelong appreciation of the creative possibilities of business. Drucker himself got off to a creative start by working full-time and attending only the end-of-term exams at law school (he passed easily). Having fled Vienna when the Nazis rose to power, in London he heard John Maynard Keynes lecture, hated it, and began to develop his own unique sense of economics. His ideas reached fruition in his landmark 1945 study of General Motors, The Concept of the Corporation. The book stated what management should be—and made clear how far GM had strayed from that ideal. In his numerous other books, Drucker proposed a number of radical (for their times) notions, among them the suggestion that pay for managers should be no more than 20 times that of workers and that fancy job titles should not be substituted for real responsibility and higher wages. He also believed that the study of business was akin to a scientific study of the human condition. Drucker's ideas helped shape the dramatic expansion of American industry in the postWW II period and influenced worldwide thinking about business. While Drucker comes across as brilliant and wry, this study is not the best introduction to the man or his work. Beatty seems more concerned with Drucker's books and some of his opinions than with his life, and the endless snippets of quotes and reviews make for a messy and somewhat unreadable collage. Written with Drucker's cooperation, a loving portrait of a distinguished life that fails to measure up to its subject.