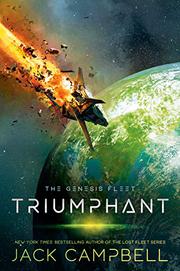 Third of the military sci-fi Genesis Fleet prequel series (Ascendant, 2018, etc.) recounting how and why the Alliance was founded.

With the invention of the faster-than-light jump drive, humanity spread rapidly into the galaxy, leaving Earth's laws and protections behind. As new colonies sprouted and settlements prospered, so did piratical systems to prey on them. Planet Glenlyon, having assisted neighboring Kosatka to halt an invasion, itself comes under threat. Faced with impossible odds, Glenlyon's sole remaining warship, commanded by Rob Geary, can only harass the attackers, while, aboard the planet's orbital docking facility, Mele Darcy's Marines must engage the invaders at desperately close quarters. Meanwhile, negotiator Lochan Nakamura faces prejudice and ingrained suspicion as he tries to persuade other colonies reluctant to cede any of their own authority and autonomy to join forces against the black hats. All Campbell's trademarks are present. On the military side, he handles riveting battles, knotty dilemmas, desperate actions, and lower-deck humor with the assurance of one who's been there and done that. And he offers intriguing insights into civilian power plays and politicking. His characters are well-drawn, with fully fleshed-out backgrounds and temperaments; some are recognizable ancestors of Black Jack Geary and companions in the chronologically later Lost Fleet books. The one proviso is that, as with all prequels, while we're never certain of the fates of individuals, we know ultimately how the situation must resolve itself.

A solid entry to extend an always reliable sequence.