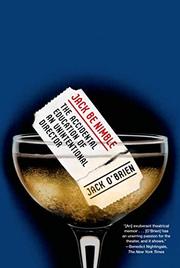 The Tony Award–winning director looks back on his apprenticeship years.

Born in 1939, O’Brien wrote two successful musicals at the University of Michigan and planned to become a successful Broadway lyricist/playwright. Then the APA Repertory Company arrived to inaugurate the university’s Professional Theatre Program, and he was swept into the glamorous orbit of leading lady Rosemary Harris and actor/director Ellis Rabb, who hired him after he graduated. O’Brien served as the volatile Rabb’s devoted amanuensis—dealing with practical matters, playing small parts, standing in for him onstage when he needed to direct rehearsals—while APA built a reputation in regional theater and stormed Broadway with a dazzling revival of You Can’t Take It With You. Himself unabashedly gay, O’Brien empathetically portrays the complicated marriage of Harris and the bisexual Rabb, which survived his homosexual affairs but foundered on his jealousy of her greater star power. Theater-history buffs will relish O’Brien’s vivid descriptions and cogent assessments of such famed APA productions as the Erwin Piscator–adapted War and Peace, Chekhov’s The Cherry Orchard, directed by Eva Le Gallienne, and the black farce Pantagleize, a personal triumph for Rabb in the title role. O’Brien finally emerged from his mentor’s shadow when producer John Houseman, who joined APA in 1965, pushed him to direct Sean O’Casey’s Cock-a-Doodle Dandy, a less-than-auspicious debut, with the company heading toward dissolution as Rabb’s drinking and mental instability both increased. O’Brien closes the main narrative with his triumphant direction of the Houston Grand Opera’s 1976 Porgy and Bess; a sad afterword chronicles his final break with Rabb. A quarter-century as artistic director of San Diego’s Old Globe Theatre and such Broadway hits as Hairspray were yet to come, but O’Brien’s evocative, loving reminiscences make clear how indelibly his artistic vision was forged in the crucible of regional and repertory theater, among some of the giants of the American stage.

Smart, gossipy and oh-so-dramatic—squarely in the grand tradition of theater memoirs.

IN SPITE OF MYSELF
by Christopher Plummer
Nonfiction