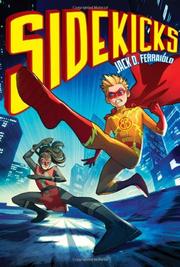 The author who made a splash with The Big Splash (2008) takes the “costumed superheroes” genre out for a joyride, and anyone who comes along will never read comics the same way again. Six years as Bright Boy, sidekick to crime-fighting superhero Phantom Justice, has left Scott a teenager with no life, no friends and revealing yellow tights that show the news cameras every bit of the involuntary hard-on he gets after heroically rescuing a beautiful victim. Then another seemingly devastating development: He and arch-nemesis Monkeywrench (Dr. Chaotic’s sidekick) both lose their masks in battle, and Monkeywrench turns out to be not only a girl, but one he knows from school. This leads to a giddy, liberating romance, as well as cool costume makeovers and sensational publicity after the cameras catch some of that love action. It also earns them death sentences from their respective employers, who turn out to be very different from their public images and not at all willing to be edged out of the limelight by supporting characters. Scott’s present-tense narration keeps pedal to the metal from start to finish, and readers will be quickly won over as the two super-strong, super-fast, super-likable protagonists face both inner conflicts and a Dark Knight–ish villain as deeply psychotic and scary as he is super powerful. Look for more twists than a pretzel factory and a possible sequel. (Superhero fantasy. 11-14)