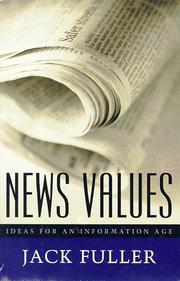 Ideas for an Information Age

A combination textbook and inspirational message to working and would-be journalists. Fuller is publisher of the Chicago Tribune, a Pulitzer Prize- -winning editorial writer, lawyer, novelist (Our Fathers' Shadows, 1987, etc.) and one-time beat reporter. For better and for worse, he edits out none of these points of view in News Values. Fuller offers nuts-and-bolts advice concerning the confidentiality of sources and the use of tape recorders, even as he muses on the nature of truth and mounts an impassioned defense of the written word. It may strike some as too large a stew of ideas, violating Fuller's credo that newspapers hoping to survive into the 21st century must provide a ``coherent . . . report of the things people need to know in order to live in an increasingly complicated world.'' Still, journalists and newspaperphiles willing to wade through the jumble will be rewarded with precisely those elements that Fuller says readers look for in their dailies: ``knowledge rather than just facts, perhaps even a little wisdom.'' He offers solid advice on ways to write balanced stories even in an era when the myth of objectivity has been exploded, and he suggests approaches to new journalism that do not violate the cardinal rules of the old. Even as he tells reporters to get the spelling of names right, he's reminding them not to forget the higher ideals of their calling. Fuller's book about newspaper writing and editing could have used a good editor. However, following his rules of intellectual honesty and balance, the other side of the coin must be stated: Like the best newspapers, Fuller's book provides ``information that matters.''