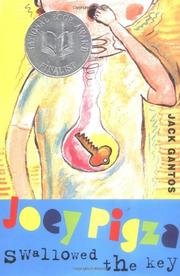 From the Joey Pigza series, volume 1

If Rotten Ralph were a boy instead of a cat, he might be Joey, the hyperactive hero of Gantos's new book, except that Joey is never bad on purpose. In the first-person narration, it quickly becomes clear that he can't help himself; he's so wound up that he not only practically bounces off walls, he literally swallows his house key (which he wears on a string around his neck and which he pull back up, complete with souvenirs of the food he just ate). Gantos's straightforward view of what it's like to be Joey is so honest it hurts. Joey has been abandoned by his alcoholic father and, for a time, by his mother (who also drinks); his grandmother, just as hyperactive as he is, abuses Joey while he's in her care. One mishap after another leads Joey first from his regular classroom to special education classes and then to a special education school. With medication, counseling, and positive reinforcement, Joey calms down. Despite a lighthearted title and jacket painting, the story is simultaneously comic and horrific; Gantos takes readers right inside a human whirlwind where the ride is bumpy and often frightening, especially for Joey. But a river of compassion for the characters runs through the pages, not only for Joey but for his overextended mom and his usually patient, always worried (if only for their safety) teachers. Mature readers will find this harsh tale softened by unusual empathy and leavened by genuinely funny events. (Fiction. 11-13)