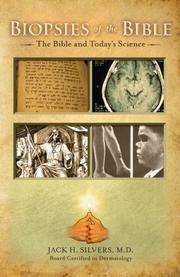 BIOPSIES OF THE BIBLE

The Bible and Today's Science

The book’s unusual title comes from the author’s occupation. Silvers is a practicing dermatologist in Southern California, and members of his profession often do biopsies—the removal of skin tissue to determine its state of health. The author argues that the Bible requires another kind of biopsy—the excision and scientific examination of certain biblical claims. Silvers, born an Iranian Jew, critiques the Old Testament and several biblical commentaries by scholars and clergy from a nonsuperstitious, Jewish perspective. He fuses this with his medical training. Among the contemporary issues he discusses: kosher dietary laws, abortion and homosexuality. Silvers claims that many biblical viewpoints can be substantiated through scientific understanding. For example, he finds that forbidding pork is based on sound medical principle since it can spread parasitic infections through tapeworms. The practice of circumcision is warranted since, he reports, circumcised men have lower rates of sexually transmitted diseases. Silvers puts science first and states that the Hebrew Bible’s claims can only be trusted when scientifically tested and confirmed. His goal is “to purge my religion of the personal opinions of rabbis in relation to science, thereby allowing Judaism to shine like the pure gold and light it is.” In spite of the sometimes shrill tone when discussing mystical elements in Judaism, the book presents a readable and controversial argument for a Judaism rooted in science. Most valuably, he has also written a powerful memoir about escaping Iran’s totalitarianism in order to pursue a medical career in the U.S. Readers who might find his arguments about “purging” Judaism of the irrational tedious can find much to appreciate in his thrilling description of his odyssey to freedom.

A sustained, well-reasoned argument that biblical viewpoints unsubstantiated by scientific proof should be discarded as superstition.