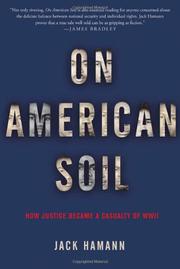 Murder, the Military, and How Justice Became a Casualty of World War II

An Emmy-winning journalist sets the record straight about the death of an Italian POW during WWII.

First-time author Hamann came across the name Guglielmo Olivotto when he discovered a unique grave featuring a broken Roman column, one of several “unusual objects,” he was told, on the grounds of a former Army base in Seattle’s Discovery Park. The headstone nagged at the author, who eventually learned that Olivotto had been murdered during a riot that led to one of the biggest courts-martial in the history of the Army. In August 1944, after weeks of American soldiers’ grumbling about how the Italians were being mollycoddled, a throng of black enlisted men attacked some of the 200 Italian prisoners being held at the base. Most of the rioters and Italians suffered scrapes and bruises. Olivotto, however, was found dead—hanging from a cable on the base’s obstacle course, as if he had been lynched. Hamann cites declassified documents, court transcripts and interviews to show how the segregated Army compromised justice so that black soldiers were pinned to the crime, leaving possible white suspects overlooked. Particularly damning is the way military police performed during and after the riot. Their main goal, Hamann suggests, was to forestall more trouble, rather than collect evidence that might solve a murder involving African-Americans and a captured enemy soldier. In a welcome addition to military history, the author sheds light on the circumstances of Italian POWs in the United States (many of whom enjoyed confinement because they never wanted to serve in Mussolini's army in the first place), but the courtroom drama that makes up much of the second half reads less easily. Even so, Hamann does an excellent job of humanizing the two opposing lawyers in the case, including Leon Jaworski, who later became a confidant of Lyndon Johnson’s, though readers may feel tested by the seemingly endless parade of names and details resulting from Hamann’s meticulous research.

A welcome piece of military history, adroitly balancing racism and legal questions in one story.