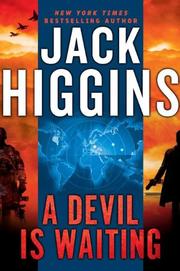 A DEVIL IS WAITING

Even the veteran novelist doesn’t seem thrilled with this one.

Times of global unease provide plenty of fictional fodder for both fans and authors of international thrillers. While the latest from the bestselling Higgins (The Judas Gate, 2011, etc.) encompasses car bombing and assassination attempts, conspiracies involving members of the IRA and the Taliban and an irresistibly gorgeous heroine who happens to be both a millionaire and an accomplished killer, it suffers from a curious lack of narrative momentum, stilted dialogue and implausibility even within the fictional world it inhabits. Britain is the primary setting for the British author who has more than 60 novels under his belt, though the action propels the narrative from New York to Afghanistan, as a team of British, American, French and Muslim confederates attempt to foil a plot that may involve the assassination of the president. Or revenge for the death of Osama bin Laden. Or something. The central characters within the “Prime Minister’s private army” remain Sean Dillon and Daniel Holley, under the command of General Charles Ferguson. Fans of the series will remember that both Dillon and Holley were both previously involved with the IRA, and that the latter once almost killed the former, but by now they’ve become close friends and comrades, their devotion to the British Empire unquestioned. Providing a romantic twist is the ravishing, redheaded Sara Gideon, a Jewish war hero and undercover intelligence officer enlisted by Ferguson’s team. Everyone assumes that Holley will try to seduce her, though she spends much of the novel trying to seduce him. As has become his unfortunate tendency, Higgins attempts to advance the plot through dialogue that one can’t imagine anyone actually saying—e.g., “As you two well know, several dissident groups, all IRA in one way or another, have raised their ugly heads once again.” And “International terrorism is the scourge of our times, Mr. President, powered by fanatics who insist on extreme views. It’s like a cancer that needs to be cut out to stop it spreading.”

The world survives, but will boy get girl? Or girl get boy?