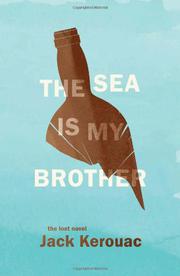 THE SEA IS MY BROTHER

A forgotten novel—forgotten, by its author, for a reason—by Beat Generation icon Kerouac.

Years before taking to the highway, Kerouac tried his hand at a Jack London–esque yarn. He had all the material he needed out on the open ocean, where he served a short hitch in the Merchant Marine during a dangerous time of prowling wolf packs of Nazi submarines—and it’s a sobering thought to realize that Kerouac first tried his hand at a novel fully 70 years ago, back on dry land. The result is a work that, well, reads in many ways as if written 70 years ago (“It was there he’d met that cute little colored girl who belonged to the Young Communists League”). The story concerns a young man, “just above average height, thin, with a hollow countenance notable for its prominence of chin and upper lip muscles, and expressive mouth…and a pair of level, sympathetic eyes”—a young man, that is, very much like the 20-year-old Kerouac—who finds himself on shore leave in New York, and there gets himself in all sorts of whiskey-soaked mischief. Though Kerouac myth has it that he sprang fully formed, like Athena, from America’s brow with On the Road, this antedates his masterwork by a full decade, and it shows every sign of being a first book (as when, early on, Kerouac has difficulty deciding whether the narrative is to be in the past or the present tense, mixing both). But the centerpiece of the story is a friendship, sometimes bordering on homoerotic, between two young men in a time of war and social stress, which, of course, would remain Kerouac’s grand theme for many books to follow. Not much happens in the book, which, for all its awkwardness, has promising moments. However, readers expecting the exuberance and poetry of the later Kerouac will come away unsatisfied. Of interest primarily to scholars and diehard Kerouackers; general readers ought to head to the far more memorable On the Road, The Subterraneans and The Dharma Bums.