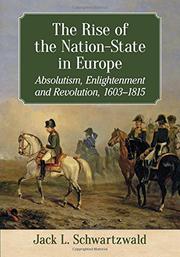 THE RISE OF THE NATION-STATE IN EUROPE

A scholarly history explores the emergence of the nation-state out of the political and philosophical upheavals of the 17th and 18th centuries.

In this book, Schwartzwald (The Collapse and Recovery of Europe, 2015, etc.) announces an ambitious task: a chronicle of the genesis of the nation-state. The author divides his history into three interconnected parts. First, he charts the attempt of kings to aggrandize their power by claiming divine support—King James of England pursued such unlimited rule, followed by his successor, Charles, who shared his “absolutist pretensions.” Paradoxically, Oliver Cromwell’s thirst for power, which involved keeping the restoration of a Stuart dynasty at bay, ushered in a “triumph of constitutionalism” in England. Later in this section, the focus is on France and King Louis XIV’s indefatigable quest for a centralization of his power and its territorial extension, a quixotic aim that "sowed the seeds of the monarchy’s destruction even as he raised it to its zenith." In the second part, state power is reinterpreted as a contract between ruler and ruled, though in such a way that “enlightened despotism” is preferable to democracy. Schwartzwald lucidly demonstrates that such a reinterpretation of legitimate political authority tended more toward revolution than reform. In the last section of the book, he explores the final throes of political absolutism, its death supported by the Enlightenment philosophers who elevated reason and nature over the divine and made popular sovereignty both attractive and defensible. Each part concludes with a “societal achievements” section, which offers commentary on the intellectual and scientific advances of the time. The author aims to reach the “student and the general reader alike” and does indeed in admirably accessible prose. Occasionally, readers will be overwhelmed by a swarm of details, but Schwartzwald skillfully keeps his eye on the big picture. His view certainly isn’t an original one, and he doesn’t delve as deeply philosophically as other well-known studies. But he ably furnishes a brief but rigorous overview.

A slim, useful guide to a politically fraught but historically transformative stretch of European history.